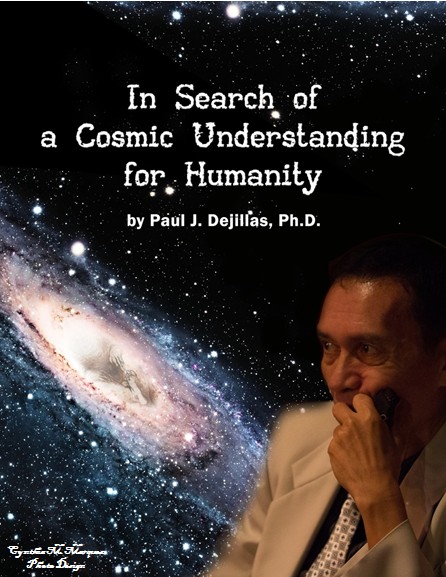 Journey to the unknown can be mind-boggling

and breath-taking. To appreciate this,

“Exploring Our Cosmos” is about viewing humanity from the perspective of the Cosmos, utilizing the lens of quantum physics.  A good grasp of what the Cosmos is all about – how it began, what was before it, what are its laws and dynamics – provides a foundation for a discussion of humanity, considered as the peak of the cosmic evolutionary progress.  It seeks to respond to the age-old human concerns: Who are we? Why are we here at all? What is our role and mission on this Planet Earth? Where did all the stars, planets, clouds, stars, plants, and animals come from? How did they all begin? What is their impact on us humanity today, in particular, on our role and destiny?

Join us in exploring answers to these questions!

Exploring Even the Unknown Side of the Cosmos

Let’s continue exploring the hidden and still unknown side of our Cosmos. Our Mother Earth has already been saddled with so many problems over the past few years that she may no longer be able to nourish and sustain us any longer, all because also of our own doing. Unless we behave ourselves, our only alternative is to start packing up and buy a one-way ticket to Mars. Science has been frenziedly working overtime preparing to bring humanity (at least, those able and willing) to Mars and beyond. Scientists are confident this will be realized within a 100 years. But in the meantime let’s behave.

The Lofty Lord and Guardian of the Galaxies

This happened before the global pandemic. With my telescope, I was waiting for the Red Blue Moon to appear that night. But past midnight I was already getting very sleepy. No longer able to bear it, I took a quick shot of the moon with my cell phone before I went down to sleep.

It was only the following day that I noticed that something strange appeared in the photo I took early dawn. I am reluctant to ask these questions but I can't hold it for long anymore. "Am I seeing the face of the Lord and Guardian of the Stars and Galaxies?  “Or is it my holy curiosity (as Albert Einstein quips) and my imagination that was getting hold of me?"

What is even stranger is that a few minutes after I posted this sighting, an FB friend of mine Dawn Pomahatch sent me her sightings of the same phenomenon  years ago. Coincidence? Design? But for what? Is the Lord and Guardian of the Galaxies sending a message to humanity?

It is believed by many that there is continuing communications between the physical and the spirit worlds, between the visible and the invisible. These communications usually carry with them signs and hidden messages that are to be deciphered. The messenger usually doesn't communicate to us in languages, but in symbols, ideas, and forms. Anyway after long reflections, I have discovered the messages that were sent only for me. The photos can be viewed in this link Paul Dejillas | Facebook (you may scroll down to my post on April 27, 2022).

My exploration of the world beyond must go on….

How can I explain the existence of the Cosmos and all its creatures, including the emergence of the gods, goddesses, spirits, and other extraterrestrial beings? Is this a product of the world of nothingness?

My response could be quite disturbing and shocking. What I'll be saying here is intended only for myself. I have no intentions of converting people. For, like me, they too can structure their own world the way they desire it to be.

The Cosmos is just a product of people's imagination. It's all illusion, fantasy, and make-belief, concocted when people appeared in their four-dimensional world.

Becoming smarter and shrewed, one group of people created somebody bigger and more powerful than themselves whom they can turn to either in times of need or failure. For gaining favors, they bribe their god, goddesses, and idols with rituals. For blaming them as the cause of the people's misery and suffering, they are able to evade the wrath and ire of the people.

The other group of people realized their innate talents, skills, and expertise that they invented humanoids or robots who are able to do and perform what ordinary individuals could do. Realizing that they can acquire power and attributes of the gods and goddesses and can become like them, they reengineered the genes and DNA of all living species so that their physical bodies can detect, diagnose, and repair or replace any ailing and defective organs.

Indeed, this group of species have now produced other variants of creatures that are able to withstand the rigor of extreme climatic conditions that they feel they no longer need the intervention of the divine and the spiritual. Development and growth become directed by wherever science and technology may bring them.

Of course, I could not discount the fact that we need all these beliefs in order to make sense of the chaos, disorder, confusion that continue to prevail during this time of the pandemic. This is one measure we can be safe and stay blessed. We need to follow their protocols.

And there could be some reasons why we are placed in this particular planet in our Solar System, not in Pluto, Jupiter, or Venus. Whether it is to learn or just to survive does not matter. We are just here to live and be happy and joyful while living it out. As they say, life is too short.

But there is another way of staying safe and blessed. Our body and spirit are designed for it to insure that we remain happy and joyful for eternity. It is the only reality, unconcerned of the illusions going on in Planet Earth.

The world beyond them, the realm where I have traversed, has nothing to do with the creation of science and religion. It does not care what they are doing and where they will be leading to. It is purely their concern.

Whether they are killing each other, whether they die or not, the world beyond does not feel or show any compassion. Neither does it see any need of a savior, especially because they have already their prophets and Messiahs.

The world beyond is not responsible for anything that appears and happens in the physical and spiritual Cosmos, including all it's creatures. It's not its creator. Neither does it expect any indebtedness from them. They can only be indebted to themselves.

But is this what really is? Critical as I am, WHAT IF this is not so?

My apologies to those who feel they are being critized or attacked. But if you feel guilty, question those who have drowned you with their beliefs since birth. They had been imposing what they want on us, not what we want. And if you want to go beyond the world of science and religion, find your own way out.

For me, I will continue my exploration to know and experience more. I can only be proven right or wrong this way. That's why if you want to explore what's beyond us, do so at your own risk because there's no guarantee of where you'll be going and what you'll discover and experience.

But whether right or wrong, what matters is that I'm expanding my horizons. I don't care anymore where I'm going as long as I know what I'm doing.

Should animals be used in laboratory experiments?

Do you believe in paranormal phenomena and events?

Does science disapprove the existence of God?

Should we bring extinct species back to life?

Do you believe in reincarnation?

Does science disprove the existence of God?

My 27 youtubes can be viewed here.

My seven Cosmic Books can be accessed here.